I’m delighted to say that the LEGO Ideas Mighty Morphin Power Rangers Project has received 10,000 supporters! A huge THANK YOU to everyone who’s supported this project. What does this mean for the project now? Now that the project has achieved the required 10,000 supporters, it has gone into the LEGO Review phase. Beginning in May and lasting for several months, this project (along with several others) will be evaluated by a LEGO review board to see if it can become a new LEGO Ideas set. If it does get picked, there will then be several more months of design and production before it hits shelves. Let’s hope that happens! :)

Regarding the possibility of Saban Brands signing a deal with the LEGO group while already having a deal with another brand (MEGA), Jason Bischoff (Director of Global Consumer Products for Saban Brands) put those fears to rest pretty early on with a post on RangerBoard.com, saying:

“It is a non-exclusive deal […] there is nothing about the MEGA deal that prevents us from exploring LEGO ideas.”

To (more tangibly) celebrate passing the halfway point on this project, I wanted to build part of the Megazord. It has a removable sled that comfortably fits all five Power Rangers, too! Please continue to spread the word! #LEGOMMPR

SUPPORT THIS PROJECT on LEGO Ideas!

I’ve loved the concept of LEGO Ideas from its inception and have been impressed by every set released. I’ve been waiting for the right idea and the right time to try my hand at a project. As a lifelong LEGO builder (and Power Rangers fan!), and now the proud father of two Power Rangers fans, this set seemed like a no-brainer. Please help me make LEGO Power Rangers a reality; if not for me and my sons, than for everyone to celebrate the upcoming movie and/or the Power Rangers’ 25th anniversary in 2018! #LEGOMMPR

SUPPORT THIS PROJECT on LEGO Ideas! 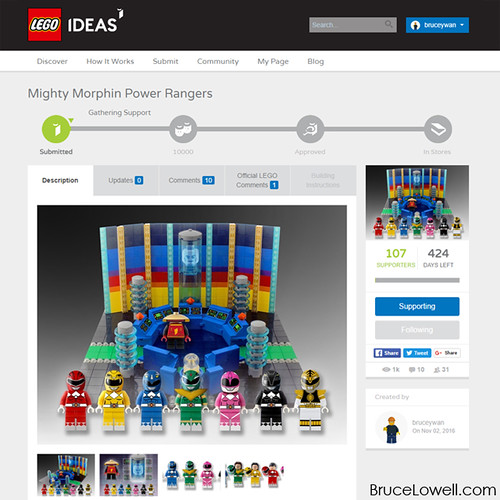 Check out my interview with Sheila over at Brain Power Boy, in which I answer a few questions about my history with LEGO and how boys (and girls) can continue to learn and grow with the toy.